Are you tired of endless lists of tasks that you, with good intentions, entered in your existing todo-application? Let's be honest, most of the tasks in your todo-lists will never be completed! Many of them will become obsolete or less important over time.

In the morning, decide which tasks you really need to complete today and create a task for each one in the GTDT app.

During the day, open the GTDT app, select a task and start a Pomodoro (a 25 minute period of focused work). If one 25-minute Pomodoro is not enough for a specific task, just restart the pomodoro.

What is the Pomodoro technique?

The Pomodoro technique relies on the fact that 25 minutes is the perfect time period for performing focused, uninterrupted work. It's short enough to be able to completely focus on a task and long enough to actually achieve something.

During a Pomodoro, you should not let anything else distract you. You should not check your email, your Twitter feed or whatever. Ideally, you should also dismiss any interruptions that may occur, like incoming phone calls, collegues coming over wanting to discuss something etc. Instead, kindly tell them that you will get back to them shortly. (Shortly is when your 25 minute Pomodoro has ended).

The Pomodoro technique also recommends taking at least a five minutes break between the Pomodoros. The break may also be longer.

Pomodoros are the perfect fit for making progress when studying, programming, designing or doing whatever solo work that needs your full attention, but doesn't involve much collaboration with other people.

The name Pomodoro was inspired by the tomato shaped kitchen timer. (Pomodoro is italian for tomato) 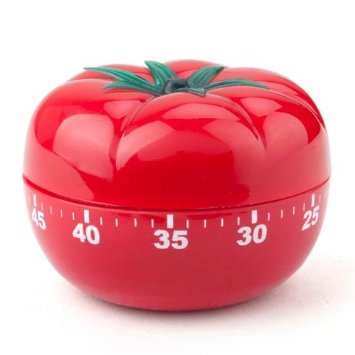 "Get Things Done Today" is a philosophy that focuses on the most important short term tasks and uses the Pomodoro technique to complete them.

This philosophy challenges David Allen's time management method "Getting Things Done", which encourages its followers to manage every single task they can think of, short term and long term, and then hide the tasks that cannot be done in short term.

GTDT puts no focus at all on long term tasks. Instead, GTDT assumes that if some future task is important enough, it will attract your attention again anyway. If a future task turns out to be not-so-important, you will not think of it again and it should simply be forgotten.

"Getting Things Done is a time-management method, described in a book of the same title by productivity consultant David Allen. It is often referred to as GTD. The GTD method rests on the idea of moving planned tasks and projects out of the mind by recording them externally and then breaking them into actionable work items. This allows one to focus attention on taking action on tasks, instead of on recalling them."

"The Pomodoro Technique is a time management method developed by Francesco Cirillo in the late 1980s. The technique uses a timer to break down work into intervals traditionally 25 minutes in length, separated by short breaks."